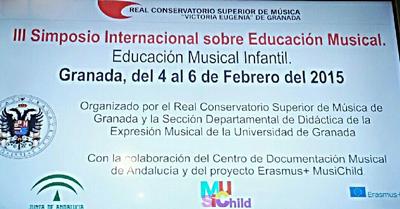 It took place at Granada Higher Conservatory, Spain from Wednesday, 4th February 2015 to
Thursday, 5th 2015. There was a diversity of precedence of participants, more than 50
participants. Most of them were students enrolled at the specialization of Musical Pedagogy, but
also teachers from Conservatory and Schools of Music.

The multiplier event was embedded in the 3rd International Symposium of Music Education
organised by the Granada Higher Conservatory and the University of Granada, Music Education
Department, this time dedicated to early childhood music education.

During the first presentation:

1. Avra Pieridou Skoutella of C.C.R.S.M. introduces several concepts about how children
from 0 to 7 years old learn. She discussed some major theories on human agency, musical
identities, flow and micro-pedagogy.

2. Paola Anselmi, from the Donna Olympia Popular School of Rome, discussed the Gordon
theory of musical learning and Bolton contribution and the Orff method in ECME. She
also introduced the “Musica in Culla” project for early childhood.

3. A discussion was carried out with the participants.

During the second presentation:

1. José Luis Aróstegui, from Granada University, discussed different approaches to
evaluation and its implementation to music early childhood. He also introduced a first
draft of the MusiChild evaluation tool.

2. Zoe Dionyssou, from the Ionian University, reflected on the concepts of musicality,
authenticity, bi and multi musicality and its application to Early Childhood Music
Education (ECME) to evaluate the instructional process.

3. A discussion with participants was followed.

During the third presentation:

Avra Pieridou, Paola Anselmi and Zoe Dionyssou offered a practical workshop doing activities
with participants (singing, dancing, moving, playing…) illustrating our proposal of intervention
in ECME from an intercultural perspective. We decided to include this workshop in order to
share a practical experience with participants, since outputs 2 and 3 are by and large theoretical.

This workshop was somewhat similar to that one offered in Nicosia during the first multiplier
event. A 30-minute discussion with participants was followed after one-hour workshop.